Posted on April 4, 2011 by redroundorgreen

Grocery shopping is becoming weirder and weirder as the weeks pass.  With food prices wildly swinging all over the map (mainly up, way up, but with the occasional “super-bargain!” thrown in as grocery stores try desperately to keep customers happy), our buying habits have changed.  And it’s maybe not what you’d think — truth be told, at this point, we’re buying MORE from Whole Foods and from local farmers and purveyors, less from the large-chain groceries.  Why?  Because if I’m going to be paying THAT MUCH for meats, dairy, and miscellaenous grocery items, I’d rather go whole hog and make sure I’m getting the kind of quality I want.

While the winter farmer’s markets are still in full swing, I have to confess that we have not been going.  It’s a good 20-25 minute drive from our house, depending on which market we choose, and since they’re only open on Saturday mornings or on Wednesday nights right after work, it’s been relatively challenging to really find that extra time in our schedule to go regularly.  Once we’d get up there, shop, and come home, we’re talking about a good 2 hours or more carved out of the time we’d rather be spending at the playground as the weather warms up; and I’m not missing playground time with my boys if I can help it.  I’d love to be a full-on locavore, but frankly, I’ve got priorities.  The summer market down the street opens in a month; when that comes back, we’ll go back to our local ways.

So every week, as J. heads out to the big chain grocery around the corner on Friday nights for our “staple” shopping trip, his list is becoming heavier and heavier on things like produce (our grocery has a pretty good line of affordable organic produce) and basics like flour.  Where I used to write lists of meat and dairy, there’s virtually nothing; where once there were items like natural granola bars, there’s only raw oats and maybe peanut butter.  We’re making so much of what we eat from scratch that packaged goods are nearly disappearing altogether from our shopping carts.  And STILL he comes home having spent $120 or $150…on what, we can’t really say…with major items like meat still to be purchased for the week.

Today L. and I went on our almost-weekly outing to Whole Foods to pick up meat and some other things that J. hadn’t been able to find at the bigger chain grocery.  We purchased things I’d never in my wildest dreams thought I’d be buying at Whole Foods — like bacon.  Who buys bacon at Whole Foods?  I had protested to J., but we needed it; the package he’d bought at the regular store was, like so many things now, mysteriously downsized from 16 oz. to 12.  He hadn’t even noticed when he put it in the cart or shelled out the $6 they were asking for it.

The whole time L. and I cruised the aisles, I tried not to grimace as we picked up item after item.  Onions — they hadn’t been fresh at the big grocery.  Salmon — can’t get wild salmon anywhere else near our house.  Meat — for obvious reasons; but I did buy 1/3 less than I ordinarily might have to keep the cost down, and we’ll just trim our portions.  Frozen fruit, because P. practically subsists on it, and we enjoy smoothies for breakfast anyway.  The list went on and on.

Guess what?  When J. and I scrutinized the receipt at home, expecting to see a “Whole Paychecks” kind of result, we realized that most of the items L. and I had chosen were not only better quality, but of equal or LOWER price than the regular store.

I still can’t believe it, but the frozen fruit — which is organic, and a much wider selection than at the regular grocery — was the same price we’d pay for non-organics.  The wild salmon was the same price our usually bargain fishmonger charges for farm-raised filets.  And the BACON.  We got organic, nitrate-free bacon — in the (sigh) 12-oz package which is now apparently de rigeur — for FOUR DOLLARS.  Two dollars less than the national bargain brand at the regular grocery.

My response was utter shock.  J.’s response was to snatch up a pen and a notepad and start a list entitled “Whole Foods Good Deals.”  He matched the grocery receipts from the two stores and began writing down all the items that are a better value at Whole Foods than they are at the neighborhood grocery chain.  And the whole time, I was realizing that the reason this worked out for us was because we’ve unconsciously adapted the way that we eat to tip the scales in our favor.

Of course high-quality dried fruit and frozen organics will be less expensive at WF — their clientele demands those products, and WF has enough acceptable brands to choose from that there’s natural competition built in.  Of course they’ll have a sale brand of nitrate-free bacon to entice their customers, just as the other grocery will have sales on Oscar Mayer from time to time.  And of course we made out like BANDITS on items like rice, because we’ve finally realized that shopping in the bulk bin section at WF is both healthful and economical, whereas the exotic wild rice blend L. chose for tonight’s dinner would be a “gourmet” or “specialty” product at the regular grocery and would be marked up to the nth degree, if we could even find anything similar to it at all. 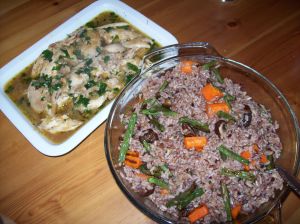 It’s finally making sense to me.  You can eat very, very well on a budget, if you understand how to shop where like-minded people shop; if you can purchase items where many others who eat like you do are purchasing them, then the prices will be competitive just as the prices on hot dogs and packaged cookies are competitive in most large grocery stores.  In the average American grocery store, whole grains and nuts and dried fruits come pre-packaged at high prices because they’re not flying off the shelves the way the Lucky Charms and diet soda are; but in stores like Whole Foods, you can buy those things from the bulk aisle for next to nothing, because the WF customers are religiously filling their shopping carts with that stuff and have demanded that it be available in some format that’s not going to break the bank every time they want Irish oats or dried cranberries without added sugar.

The picture above is tonight’s Sunday dinner.  The chicken came from WF when it was deeply discounted; the stock I braised it in was homemade from leftover carcasses I had in the freezer.  The wild rice came from the bulk bins and cost a whopping $1.10 for the massive amount you see in the photo.  And the vegetables and herbs were an amalgam of WF and regular-grocery organics, purchased wisely and cooked simply.  We’ll stretch the leftovers to fashion them into another dinner, as well as get several lunches from them.  Grand total, not counting the cost of pantry staples like olive oil and vinegar: $18.50.
Food prices are rising, yes.  But so, I have to say, is the availability of quality ingredients; and as the demand continues to surge for better food, and customers like me — who are lucky enough to be able to make the choice to buy some of those items regularly — continue to support it, I think we’ll see more and more equalization between the prices of truly good, healthy food, and mainstream grocery food.  Will quality always cost a bit more?  Probably.  But in a world where nitrate-free bacon can be bought for less than the nationally recognized brand, I have to believe there’s at least a little hope.