Posted on September 25, 2011 by redroundorgreen 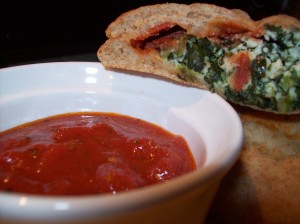 If you want to get a recalcitrant toddler to eat his spinach, apparently, make it seem like pizza.

At least, that’s the rule of the week in our house, as P. continues his strike against anything green (we’re on about month, oh, 4 or 5 now…I keep reminding myself that L.’s no-veg strike lasted almost 2 full years, so patience is key).  I assumed that Thursday evening’s dinner of pepperoni and spinach calzones would get no closer to P.’s mouth than anything else that resembles something-formerly-plant-based, but in fact, P. DEVOURED the calzones.  Truthfully, he ate more than I did, and had them again the next day with no complaints.  He knew that there was spinach in there — okay, so he called it “broccoli,” but he understood it was a vegetable, at least — and he didn’t have a problem with it.  In fact, he relished it.  So what if he called it “inside-out macaroni broccoli pizza” instead of pepperoni and spinach?  He’s two.  My transparency rule around food does not extend to taking things so far that I risk ruining his precious illusions and turning him off from eating something I want him to eat.  And based on the succcess of the meal, I’ve stashed a couple of leftover calzones in the freezer for lunchbox emergencies as well.

We washed the calzones down with mango-banana smoothies, which would obviously jack up the price of the dinner; but they weren’t strictly necessary.  We just had them for fun, and to get a little extra serving of fruit into the kids.

Preheat the oven to 450 degrees and lightly grease a sheet pan.  Dice the pepperoni and set aside.  Squeeze the spinach in a clean kitchen towel until you’ve wrung out as much moisture as possible.  In a medium bowl, combine the spinach, ricotta, and nutmeg, seasoning to taste with salt and pepper.
To assemble the calzones, cut the pizza dough into eight equal parts.  Roll each piece into a small ball, then flatten into a circle about 4-6 inches in diameter.  Spread 1 tablespoon of marinara sauce in the center of each circle, then top with 2 tablespoons of the ricotta mixture and a sprinkling of diced pepperoni.  Fold the dough over the filling and press the edges firmly to seal.  Place the calzones on a greased baking sheet and bake at 450 degrees for 15 minutes, until golden brown.  Serve with warm marinara sauce for dipping.

The last $4 dinner of the week was tonight’s meal of Thai-style carrot ginger soup and Crispy Pork and Vegetable Wontons with Peanut Dipping Sauce.  I must confess that the soup wasn’t great — it was FINE, but not memorable — so I’m not bothering to share that venture here.  The wontons, however, were AWESOME.  This was a spin on a recipe I’ve tinkered with for a while now, and the happy accident of not being able to get wonton wrappers at Whole Foods this morning really made the dish, because I was forced to substitute egg roll wrappers and bake the things until they were crunchy, rather than steaming or boiling as I would have with the won ton skins.  And once I had crunchy wontons, I needed a more substantial sauce than my usual soy dipping creation; thus was born the peanut dip, which (by the way) can also be made nut-free with sunflower butter.  I’ve done it before, and the difference, once you’ve added all the Asian flavors to it, is negligible.

There were no leftovers, by the way — the wonton recipe makes about 2 dozen, so I thought we’d at least have a FEW left to nibble on tomorrow, but there was not a single one left.  Seriously, you may want to consider making these things for your next party.  They’d be great appetizers, and everyone will think you’re a genius.

In a large, heavy skillet over high heat, stir-fry the garlic, green onions, bell peppers, carrots, and ginger in the canola/vegetable oil and sesame oil for approximately 2-3 minutes.  Add the crushed red pepper flakes and ground pork, breaking the meat up with a spoon or spatula into fine crumbles.  Continue to stir-fry until the meat is cooked through.  Add the soy sauce and silken tofu, stirring until the tofu has dissolved into the meat mixture.
Preheat the oven to 400 degrees and lightly grease two sheet pans.  Cut the egg roll wrappers in half to make 24 long rectangles.  To assemble, place a tablespoon of the pork filling in the center of the bottom third of a rectangle.  Moisten all the edges of the wrapper with water, then fold the wrapper over the pork filling.  Press your fingers directly around the filling to force out air bubbles, then press firmly around the edges to seal.  Place the stuffed wontons on the sheet pans.  Continue until you’ve assembled them all (you should get just about 2 dozen).  Brush the wontons very lightly with oil and bake at 400 degrees for 10-12 minutes, until crispy and golden brown.  Serve with peanut dipping sauce.

In a blender, combine all the ingredients except the water.  Pulse until the mixture is combined, then, with the blender running, stream in as much water as necessary to make it smooth and creamy.  It should be the consistency of a dip — not watery, and thick enough to cling to the wontons, but still somewhat pourable.  Serve alongside the crispy wontons.

So our adventures in dinner for under $4 per person have passed, and here’s where I think things will start to get harder.  We’re in for the 3 dinners for $3 or less per person challenge this week; then down to 2 for $2 and 1 for $1 (yikes!).  I’m feeling confident, no question, but I know that I’ll have to think just a bit more creatively as I’m cooking for the next few weeks, without the benefit of being able to fall back on some pricier pantry ingredients.

Of course, I’ll be sharing the adventure here on the blog, but I’ll ALSO be sharing somewhere else: Red, Round, or Green’s new Facebook page!  That’s right, I FINALLY did what all legitimate bloggers do, and I got us hooked up with a shiny new page on Facebook where we can talk, share news, ask questions, and be a real community.  Gosh, I’m practically a grown-up blogger now.  Hope you’ll all join me there, and invite your friends as well.

9 Responses to …Anything Resembling Pizza…