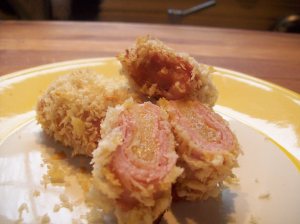 What kid doesn’t love a nugget?  Yes, they’re stereotypical “kid food,” and no, my kids don’t eat nuggets every day.  But let’s face it.  If you want to make a really awesome, kid-friendly lunch, you can’t really go wrong with something in the nugget realm.

Chicken is great, of course.  Veggie works well, too.  Fish, fine.  But what about something a little different?  Something…formerly sandwich fare?

When the idea for a ham and cheese sandwich, turned inside out and twisted around into a nugget, came to me, I thought there was no way it would work.  Happily, I was wrong — P. helped me test these bad boys, and he ate four of them before I had even sat down to the table with my own plate.  The little touch of sweetness in the center from the apple butter really makes these special.  With their bite-sized form, these little lunchbox treats could get a satisfying meal into your kids quickly, with plenty of time left for recess.

Preheat your oven to 400 degrees.

In a medium bowl, toss the panko, salt, garlic powder, and olive oil until evenly combined.  Set aside.

Beat the eggs in a shallow dish until the yolks and whites are fully combined.  Set aside.

Lay the ham slices out on a clean work surface with the short ends facing you.  Place one piece of cheese at the top of each ham slice, about ½ inch down from the edge.  Top each cheese slice with ¼ tsp. of apple butter.

Dip the ham parcels into the beaten egg, coating completely on all sides.  Roll in the panko mixture until thoroughly coated.

Place the breaded ham parcels on a baking sheet.  Bake at 400 degrees for 15 minutes, until the panko is lightly golden brown.

1 Response to Ham and Cheese Nuggets